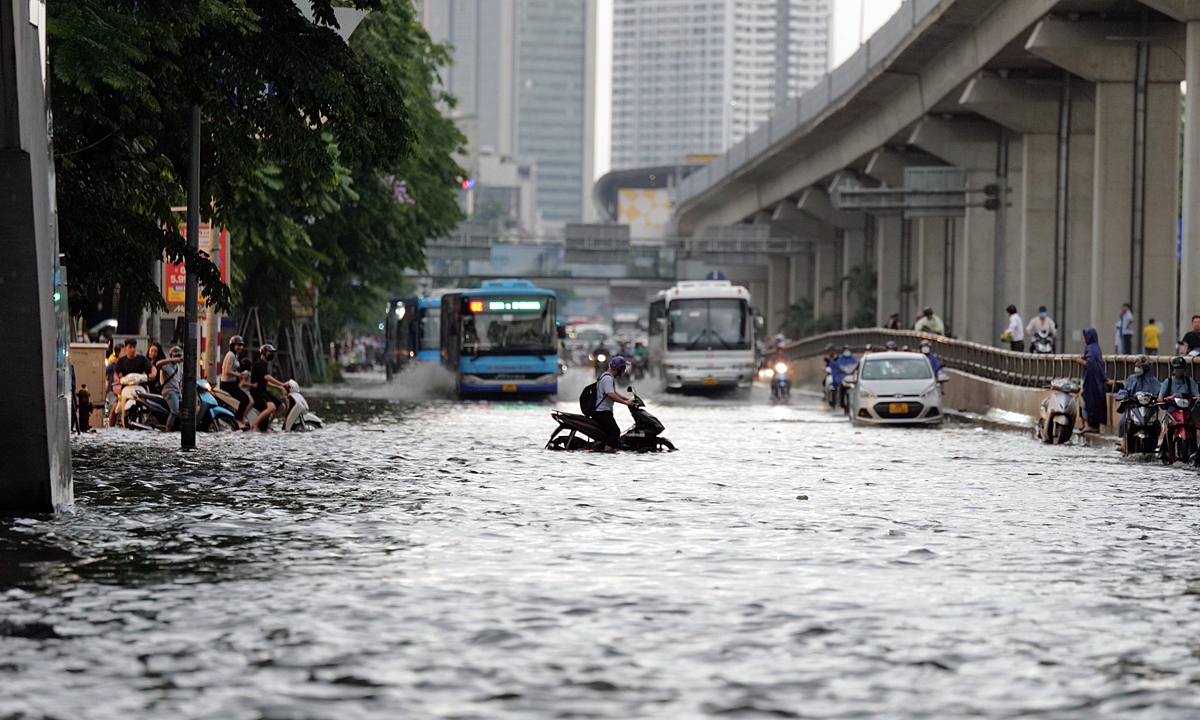 On Sunday and Monday, more than 80 places were flooded following the incessant rains, paralyzing traffic throughout the city. As rising waters invaded homes and upended lives, authorities and policy makers racked their brains trying to figure out why Hanoi is so vulnerable to flooding when it rains.

Over two hours into the afternoon last Sunday, weather stations on Lang Street in Dong Da district recorded 138mm of rain, 6mm more than the previous record of 132.5mm in 1986, according to the National Center for Hydrometeorological Prediction.

There were places with even higher rainfall like Tay Ho district (150mm) and Cau Giay district (170mm).

The 170mm of rain recorded in two hours in Cau Giay is considered the highest ever recorded in Hanoi, the center said, adding that such rains only occur once every 100 years.

Some places to the west like the Keangnam Building and Phan Van Truong Street did not see the water recede until after 10 p.m.

“Even developed countries don’t have the financial capacity to design a drainage system that can handle such a large amount of water,” Son said.

“If heavy rains are concentrated in a short period of time, no infrastructure can cope with it.”

Hanoi has 29 districts and one city, with 12 inner districts spanning 250 km2.

It can drain 310mm of rain in two days, but heavy downpours can cause flooding.

The 110 km² watershed of the Nhue River extends over the districts of Cau Giay, Thanh Xuan, Hoang Mai, Nam Tu Liem, Bac Tu Liem and Ha Dong and parts of Tay Ho and Thanh Tri. It has a high rate of urbanization but a modest drainage capacity, lacks reservoirs and its main pumps have not yet reached their planned capacity.

In the Long Bien River Basin, rainwater flows naturally by flowing into the Nam Stream, Tam Dau Canal and Cau Bay River, and the Dong Tru Pumping Station directs it into the Duong River. .

In the rest of the city, sewers carry water to surrounding fields and lakes. Thanks to a large number of lakes and ponds, flooding is rare in these areas.

Nguyen The Cong, deputy director of the city’s construction department, said the drainage system is synchronized only in inner districts.

The districts of Ha Dong, Long Bien, Bac Tu Liem and Nam Tu Liem have yet to see any investment in drainage construction, however, meaning they can be flooded if there is enough rain.

Cong said the capital is planning to synchronize its pumping and drainage systems, but this requires a lot of money and could therefore take five or 10 years.

Vu Trong Hong, the former Minister of Agriculture and Rural Development, said that in several city centers, drainage systems have existed since the French colonial era, which means they are outdated and cannot meet today’s urban needs.

Due to lack of funds to improve the drainage system, the same places in city centers continue to be flooded year after year, he said.

There are now new flood points in outlying districts like Cau Giay, Ha Dong, Bac Tu Liem and Nam Tu Liem, all of which are developing areas with rapid population growth and urbanization rates, said Hong.

Pham Thanh Tung, bureau chief of the Vietnam Association of Architects, said Hanoi has invested in its water drainage system over the past two years, but the results are unclear.

The city has limited resources but too many projects, and the construction of pumping stations and drainage systems simply could not keep up with its rate of urbanization, and this combined with the effects of climate change is leading to flooding, he said. -he declares.

Hoang Van Cuong, deputy director of the National University of Economics, said one of the reasons for flooding in Hanoi is overlapping planning by various agencies.

Houses and other urban structures are being built without considering the water drainage systems that are needed, he explained.

“According to the 2017 planning law, the construction of infrastructure, irrigation and agricultural works must be synchronized.

“If we do this right, big cities like Hanoi could solve their flooding problems.”

Lien also expressed concern about the relentless decline in water bodies and green cover in Hanoi.

As more and more concrete is used, water finds it difficult to seep into the ground and naturally flows to lower areas, creating flooding, he said.

“Hanoi is lower in the middle, and it’s still the most flooded area.”

The capital has yet to announce official statistics for encroachment on ponds and lakes, but a report by the Center for Environment and Community Research says 17 downtown lakes have completely disappeared while only seven new ones were created. The total water surface thus fell from 2,100 ha before 2010 to only 1,165 ha in 2015.

Lien said one solution is to expand lakes, ponds and grass fields in downtown Hanoi so there is enough space for water to drain.

The city must also complete its drainage and pumping station works and synchronize the drainage network in new districts.

Tung said Hanoi could learn from anti-flooding strategies adopted by cities around the world, such as building reservoirs underground.