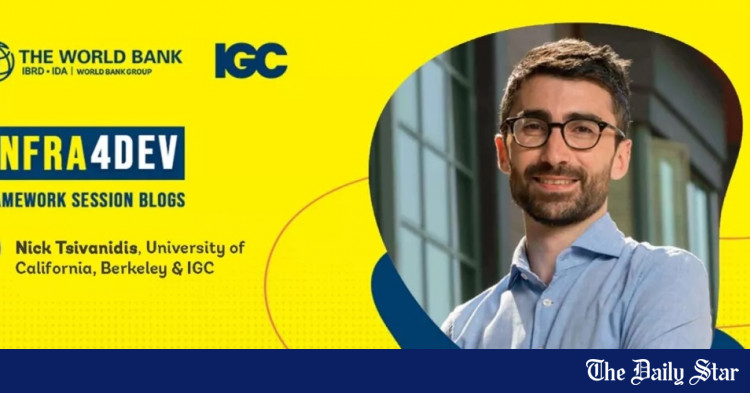 Cities are not just places to live. They are massive labor markets and engines of economic growth, facilitating the structural transformation of economies towards manufacturing and service activities. New urban transport infrastructure is changing the way people access jobs and connect employees with businesses.

The relationship between urban development and transport systems is both critical and complex. Without efficient urban transport, commuting becomes too expensive and cities cannot realize their full economic potential.

For all the latest news, follow the Daily Star’s Google News channel.

Many cities in developed countries have a sufficiently high demand density to support urban transport infrastructure. This is not always the case in developing countries, particularly in Africa, where the urban structure is fragmented and businesses and households are dispersed. Fragmented urban development disconnects workers from jobs, preventing the emergence of sustainable mobility options.

In Nairobi, Kenya, 42% of the population walks to work. They can only access 11% of the jobs and even the additional 28% who take minibuses can only access 20% of the jobs. Due to this fragmented urban form, Nairobi does not have an integrated labor market. Instead, it functions as a city with several small villages.

As such, an increasing number of poor people in South Africa are opting out of the public transport system as they decide to take jobs closer to home. Ironically, government funding is mostly for large-scale transport options, such as railways which carry only 16% of passengers, even though two-thirds of commuting trips are made on unregulated minibuses.

Where urban density is higher, scale-dependent transport solutions, such as Bus Rapid Transit (BRT) can emerge. There are now more than 180 such systems operating around the world, but little is known about their economic impacts in emerging cities.

Lagos, Nigeria is one of the few urban areas in Africa with high demand density and one of the first cities in the region to invest in modern public transport infrastructure.

Lagos has a population of twenty-four million and an additional one million people are said to move into the city every year in search of employment. In an effort to decongest the city and increase productivity, the government has drawn up an integrated multi-model transport plan that includes the construction of six railway lines, 14 BRT systems, as well as a comprehensive reform of bus transport systems. and by water.

Currently, people spend an average of four hours a day in traffic jams, which hurts productivity.

To increase the connectivity of isolated communities to major transport interchange points, last mile buses have been introduced to connect people to the BRT system. In other areas, non-motorized transport systems, such as bike racks where people can rent bikes to get around, have been introduced.

However, no research has been conducted to quantify the benefits derived from investing in public transport in Lagos. It is therefore difficult to know what additional investments and policies need to be introduced to unlock the city’s full economic potential.

EFFECT OF BRT ON TRANSPORTATION CHOICES AND ACCESSIBILITY TO EMPLOYMENT

Recent research on Bogota, the Colombian BRT system, reveals the immediate effect on commuter choices and job accessibility, as well as equilibrium effects on wages and housing prices.

With shorter travel times, BRT systems can significantly increase the number of jobs available to residents. This is especially true for the urban poor, who are 25% more likely to commute to work by bus. In addition, the development of new BRT systems increases residential land prices and residential population and generates overall economic welfare gains of 1-2%.

Public transport boosts the local labor market and its design affects the participation of disadvantaged groups. In particular, poor public transport systems have been identified as a major factor in women’s workplace choices.

Countries like India, Brazil, and Mexico have put in place various measures to improve the safety of women on public transport. Several studies show that women are willing to pay more for transportation services that provide a greater sense of security and greater social acceptability:

A study in Rio de Janeiro, Brazil, finds that one-fifth of female travelers are willing to pay 20% more to travel in the “safe space” of women-only subway cars, where the risk of harassment physics is reported. be 50 percent lower.

In Cairo, Egypt, research shows that women are more willing to pay for carpooling and carpooling due to improved security compared to other options. Lowering the price of these services further increases women’s mobility.

In Lahore, Pakistan, a study found that providing women-only transport services reduced physical mobility constraints and led to increased job search for women. Those who received a 50% transportation subsidy were four times more likely to apply for a job than those who did not.

Quantification of transit and land-use policies is important to help decision makers understand what complementary policies should be developed to maximize the return on infrastructure investments.

New urban models, such as those developed by Gabriel M Ahfeldt, professor of urban economics and land-use planning at the London School of Economics, can help city leaders visualize how economic productivity and urban form interact with each other because they provide a better description of the city. and give a much richer set of responses to infrastructure investments and policy changes.

For example, a commercial and dense city may have different options than a crowded and fragmented city. The model developed by Ahfedt of an internal city structure exhibits agglomeration and dispersal forces, and an arbitrary number of heterogeneous city blocks, making it tractable and amenable to empirical analysis.

Research on public transport infrastructure has mainly been conducted in wealthy economies. There is limited evidence in developing countries, which are very different.

For example, there could be low population density and fragmented distribution, high levels of congestion and a different set of modal choices, given that a sizable informal sector provides the vast majority of commuting for many .

There is a need to develop innovative transport solutions that can be efficient and cost-effective in low-density cities in developing economies. Economic models can play a vital role in informing this process.