What do doctors, teachers, and policemen need to know to be good at their jobs? This is the subject of a community symposium to be held next February in Ann Arbor.

Listen to the full interview.

Lisa Barry: Making a difference in the lives of others, and then in your community, is important to many people. This is Lisa Barry, and there is an educator, researcher, and project administrator from Eastern Michigan University who is hosting a special event called One Love Symposium. And here to tell us about it is Dr. Anna Gersh. Thanks for talking to us.

Dr. Anna Gersh: Thank you very much for having me, Lisa.

Lisa Barry: If there’s love in the name, I’m with it. So why not start by telling us what it’s all about?

Dr. Anna Gersh: Sure. The One Love Symposium kind of came to me at the start of the lockdown. I had been, like many people, quite disturbed by the previous administration. Lots of action. And then, when the murder of George Floyd happened, I found myself in front of the television crying about the news, like a little on a regular basis. And I realized that I was at home with my 15-year-old son and I was modeling fear. And, I mean, that’s it. You know, I just – that’s what it was. I had to do something real. I just couldn’t be another white woman crying that the world isn’t perfect. So I started to formulate some thoughts on what we might be able to do. And it occurred to me that after 17 years as a classroom teacher, and then the last four plus years, I’ve been working on efforts to improve police training, including being a member of the Mayor of Ann Arbor’s task force to create a police oversight commission. back in training in 2017. And then, now I’m a member of the Washtenaw County Sheriff’s Office Policing and Compliance Commission. I have thought a lot about the nature of human services and the fact that there is research to be done at the point of care. Thus, the overarching goal of the One Love Symposium is to develop an improving certification process for a variety of human service professions, including doctors, teachers, and law enforcement officers, which service point time. And the way we want to do that, the way, you know, I think is a really good way to engage people, is to engage in a public scholarship effort. So that means, you know, getting stakeholders, people who use public services, which is all of us, at all levels, to help create this body of information that will help those workers to improve in their work.

Lisa Barry: So who do you think is involved in all of this? Do you bring in people from all walks of life or from all professions?

Dr. Anna Gersh: Yeah, right now we’re starting that it’s kind of a three-phase process. It is a three-phase process. I have about 10 youth data collectors. I have spent the past few months participating in different school programs – virtually and in person – and talking to young people about contributing to this effort. So the idea is that we’re actually going to meet next week. We have two meetings next week, from the 10th to the 12th. It is difficult to say exactly who will show up because they are young people, and they have a lot of commitments and interests. But I think I have a pretty good team, and then we’re going to meet, and I’m going to train them on the research protocol associated with the city, which is the institutional review boards, you know , making sure to protect the people you research with. And they’re going to create, them and me, a survey tool that they’ll bring to the communities of their choosing. Go get that information, bring it back. We will put it together in a report. This report will be used to extract some discussion questions. And we’re going to use it to fuel a conversation that’s taking place at the Ann Arbor District Library on September 28, which will be a preview event. And there are training professionals, including Dr. Wendy Burke, who is the head of the teacher training department here at Eastern, Rebecca Guzman, who is a founding member of MICHWA, the Michigan Community Health Workers Alliance. And I’m crossing my fingers for Brandon Locke at the police academy at Washtenaw Community College. I’m meeting him next week, but he seems very interested. This conversation will be moderated by Dr. Michael Johnson, who is the Department Head at UMass Boston and Public Policy and Public Affairs. He’s going to facilitate a values-driven decision-making conversation, which is basically a fancy way of saying a good facilitator who is able to extract important points from interested parties to help build that body of information. So it’s really about bringing in people at all levels – young people, community members, academics, professionals – to put in place a community certification process, ultimately, and hope that it will be like a little thing of 30 hours that everyone can participate. So people like, you know, preschool teachers and brain surgeons, potentially have something to gain from this certification process.

Lisa Barry: So I hear you using words like data, research, and training. Yet it is called the One Love Symposium. Where does love come from in all this?

Dr. Anna Gersh: Well, you know, I guess that sounds… I don’t know. I don’t know what it looks like. I mean, it’s from a Bob Marley song. And, you know, it’s One Love, One Heart. You know, the idea that the social service professional deals with all of humanity is a concept of unity. And, you know, I think all the issues that arise in that moment of service where the social service professional – the doctor, the teacher, the policeman – are assessing what you need or should you be ignored or forgiven or punished. It is a moment that should be informed by the universal human values ​​that we all share. And so, that seemed like a good name for it.

Lisa Barry: So, the first stage arrives in September. And then what’s after that before the big event in February? This is how it works ?

Dr. Anna Gersh: Yeah. Mm hm. Thus, collecting data on young people during the summer. September is the kind of academic professional event. And then all of this information is going to feed into the love symposium, which will take place, in part, at the Blue LLama Jazz Club in February 2022. The specific date, we’re starting to work on that. But we have some, I’m starting to collect some. It will be more of a kind of celebratory occasion. There will be round tables, but, you know, so there will be an academic aspect, but there will also be an integrated artistic aspect. Marcus Elliot will be performing as part of this event and the great saxophonist… the young and brilliant saxophonist Marcus Elliott and who also hopes to attract other people. But we are in a process.

Lisa Barry: Speaking of this process, are you still looking for participants, or can everyone in the community participate at some point?

Dr. Anna Gersh: Yes, the September event will be both in-person and live. And there’s a teen writing contest, open to any young person from any district in Michigan, because it’s an online submission. But you need to submit to a registered teacher, so you can check this on a teen writing contest feature. Prize money and all submissions will be included in an anthology, which will be available for pre-sale to fund the pay features of this symposium. So kids can win cash prizes, participating teachers who will act as a verification level for kids’ essays or… it doesn’t have to be an essay. It can actually be anything. But, these teachers will also… there is a remuneration formula to be established for these teachers as well, and it is available on the site.

Lisa Barry: And what is the site? Where can people get more information?

Lisa Barry: And we will put that with a link to this interview on our website, WEMU dot org. Dr Anna Gersch. I hope you will let us register and follow the process for the next One Love Symposium which will be held right here in Washtenaw County. And we’ll get back to base and continue to be updated on what’s going on in all of this.

Dr. Anna Gersh: I look forward to this. Thank you.

Fact-based, non-commercial reporting is made possible through your financial support. Donate to WEMU today to ensure the prosperity of your community NPR station.

— Lisa Barry is the host of All Things Considered on WEMU. You can reach Lisa at 734.487.3363, on Twitter @LisaWEMUor email him at lbarryma@emich.edu 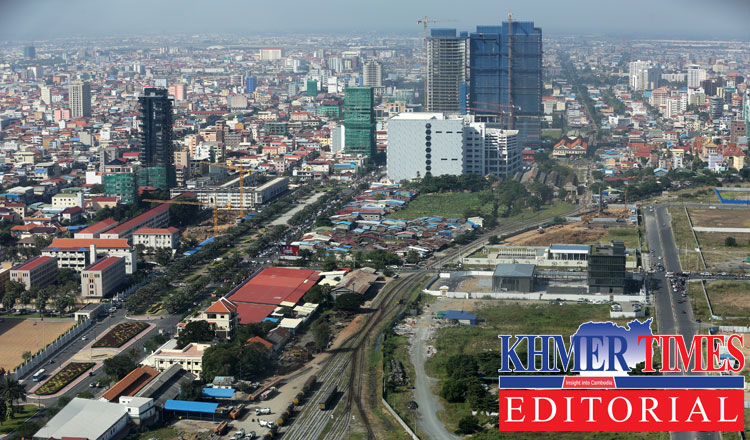 The social transformation of Cambodia, 30 years after the Paris Peace Accords