What is historical materialism? | To defend oneself! 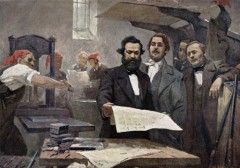 Before we get into all the details of historical materialism, let’s take an introductory look at some of the key concepts. This way we can understand how they fit together. After that, we can take a closer look at them, piece by piece.

In the communist manifesto, Marx and Engels proclaimed that “the history of any hitherto existing society is the history of the class struggle”. This is the main point of historical materialism, but there is a lot to unpack in this statement, and we should spend some time understanding how Marx and Engels came to this conclusion and what it means for revolutionaries.

“As Darwin discovered the law of the development of organic nature, so Marx discovered the law of the development of human history: the simple fact, hitherto concealed by ideological overgrowth, that mankind must above all eat , drink, lodge and dress. , before they can pursue politics, science, art, religion, etc. ; that therefore the production of immediate material means, and consequently the degree of economic development attained by a given people or at a given epoch, form the foundation on which rest the institutions of the State, legal conceptions, art and even the ideas about religion of the people concerned have evolved, and in the light of which they must therefore be explained, instead of the other way around, as has been the case hitherto.

As we have already said, Marxism is monistic rather than dualistic, which means that it does not separate matter and thought, but recognizes that thought arises from matter and depends on it. Our material being determines our consciousness. Before thinking, you have to eat. Fundamentally, Marxism understands that human society has always organized itself around its tools in the production of its material needs. Each historical period is materially characterized by its forces of production and its relations of production. Together they constitute the material and economic basis of society, the mode of production.

To this economic and material basis of society also corresponds a superstructure of society, made up of a set of repressive and ideological apparatuses whose function is the reproduction of the mode of production. This includes legal systems, courts and the police, but also cultural institutions, schools, the media, religion and the major political and philosophical ideas that characterize society. For now, let us simply point out that in the contradiction between base and superstructure, the base is typically the main aspect. The superstructure arises from the material base, although the superstructure also acts on the base and strengthens it.

Marx summarizes this very succinctly in his preface to A contribution to the critique of political economy:

“At a certain stage of development, the material productive forces of society come into conflict with the existing relations of production or – it simply expresses the same thing in legal terms – with the property relations within the framework of which they have functioned until now. here. From forms of development of the productive forces, these relations become their irons. Thus begins an era of social revolution. Changes in the economic base sooner or later lead to the transformation of the entire huge superstructure.

Historical materialism exposes the big lie of bourgeois ideology, that capitalism is eternal. It shows us that, on the contrary, it has not always been so, that things have come to be so as a result of a historical process, and that we can and must change things fundamentally and for the better. . Historical materialism is a big subject, and it will take time to do it justice. This article can only serve as a brief introduction to the elements of historical materialism. In our next articles, we will go deeper into each of them.